Providing dependencies of one object to another object called Dependency Injection.

The control of dependencies reverted from one being called to the one calling.
HighLeven Class => Abstraction Layer => LowLevel Class.

Lets talk about this calling principle with class levels. Generally in software application, we see different level of classes:

For an example one module called Pagecreation which will take character from keyboard and writes them into printer device.

In bad design , the high level classes heavily depends on low level classes. In such cases if we want to change or add some extra feature in writeToPrinter class after implementation then we have to change createPage class also. We can change if not complex one, lets think if it is a complex one then it will be really hard to change and all time we will rub our head.

For avoiding such problem we can implements an abstraction layer like interface in between high level and low level.

This is how code is not using DI

This is how code is using DI 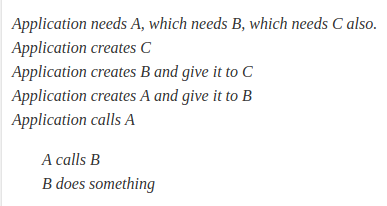 Lets say we have:

Now we want use OpenStreetMaps instead of GoogleMaps. I can simply change but what issue is , we have to change the code in StoreService and allother class which uses GoogleMaps. What simplifies here is that , without DI all codes are tightly coupled each other.

and the services that are defined using Interface.

Now it is for the user of StoreService which implementation need to use . It can be changed anytime without having rewrite to StoreService. Here classes are no longer tightly coupled each other.

So we can say there are three types of Injection

This methods requires the client to provide setter method for dependency

It is used as abstraction layer , how the injector should talk to client while injecting dependencies.

and the services that are define using Interface.

how to install magento2 in localhost